We live in a world of technology, social media and dating apps, a world where meeting someone
organically feels like something from history books. In an effort to quell one’s loneliness or to
feel proactive in the search for a partner, online dating has become commonplace. However,
studies have shown that dating apps can have a negative impact on mental health, causing users
to experience higher stress than those who do not use the apps. There is the potential for a
significant increase in anxiety, depression and poor body image. Some users have admitted to
using dating apps solely for the external validation, perpetuating the superficiality of online
dating. Users who have preexisting disorders need to be extra vigilant in navigating triggers
aroused by the impersonal swiping and the seemingly endless rejection. The use of online dating
apps increased substantially during the Covid pandemic and has not decreased even as things
have normalized. People have grown accustomed to the ease of serial swiping and the large pool
of potential options these apps offer. But users report a dating app phenomenon called
“ghosting”, ignoring or disregarding a person after mutual interest, interaction and/ or after
meeting in person. The consequences of this behavior in the real world have not translated to the
online world and it is becoming rampant. It understandably takes a toll on a person’s mental
wellness.
Some suggestions for maneuvering online dating while preserving your mental health:
1. Avoid logging into a dating app when you’re in an especially vulnerable or emotional
state.
2. Try to abstain from mindless swiping. Be intentional when you are engaging on the app
and limit the time you spend swiping through potential candidates.
3. Continue to cultivate your passions and relationships in real life. It’s easy to get caught
up in the online social world.
4. Be conscious and aware of when you’re feeling negatively affected by online dating and
give yourself breaks when you need them. 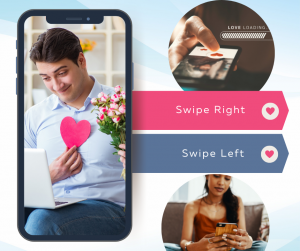